We’ve now been in the UK for 12 days.  Here are six photos that might give you a sense of our visit.  My sister has joined us, and our sons and their girlfriends, too.

Lynnell rejoicing at the sound of Big Ben tolling 4 pm.  We walked past the heavily-guarded 10 Downing Street and then spent a couple of hours in Westminster Abbey where so many Englishmen and a lot fewer Englishwomen are buried.  First impressions: the streets are so narrow, the Underground so efficient, Carter’s future in-laws so welcoming and interesting, and the weather has been utterly perfect.

The Paternoster Gastropub in the shadow of St. Paul’s Cathedral.  A hundred or so young men and a half dozen women in business attire stand or sit, sipping pints of beer.  “Paternoster” means “Ourfather” in Latin, the famous Lord’s Prayer.  In this very unreligious country, there are so many religiously-based place names.  Later in the week, we climbed St. Paul’s and looked down on this lane from above the gray dome.

Will points to the room where Shakespeare was, maybe, born. We took the train from London to Birmingham, and another one back south a bit to Stratford-Upon-Avon.  On a brilliantly sunny Saturday we saw the Royal Shakespeare Company’s Cymbeline.  It’s a play full of plot twists and secret identities.  The hero is Imogen, a princess whose parents want her to marry an evil, slimy fellow, but who has fallen in love with her lifelong friend.  The dangers mount, but there are several happy endings as the truth, again and again, wins out. 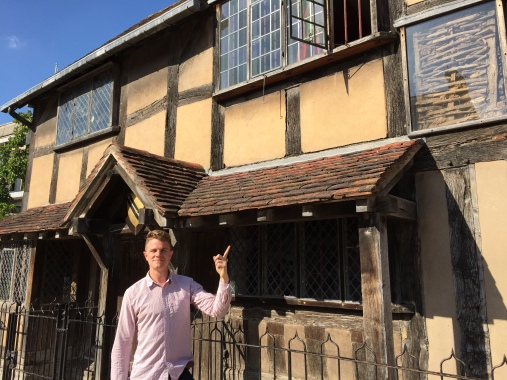 Our sons atop St. Paul’s Cathedral, with the Thames River, the Shard, and the Millenium Footbridge in the background.  Left to right: Jackson (26), Carter (23), and Will (28).

The Rosetta Stone in the British Museum was looted, or in the words that soldiers themselves carved on the left side of the stone, captured by British soldiers in 1801, as if it had been a prisoner of war.  It was the key to understanding hieroglyphics, because the Demotic and Greek texts are the same, word for word.  The inscription is by some priests, praising Pharaoh.

Carter’s Professor Patrick Spottiswoode gives us a look at the Globe Theatre, where Carter studied during his junior year at Rutgers.  We ran into him quite by accident, and he happily showed us around both the main stage and the Sam Wanamaker Theatre. 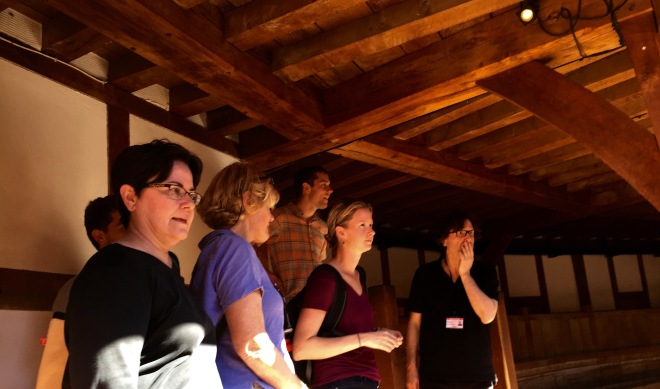 3 thoughts on “Six Photos from London”