After Iceland, after a wonderful long weekend with our friend Mélanie and her family in Paris, and after four days at the Taizé Community in the middle of France, John met Lynnell at the airport and we headed for the south of France. It was exactly 32 years ago to the day when we were married, and we’d long wanted to retrace the steps of our honeymoon in this part of the world.

Lynnell had gone to Minneapolis for ten days of taking care of business. Our plan was to revisit the French towns and, if possible, hotels and restaurants where we’d relaxed after our wedding in Detroit and the subsequent thrill of the Tigers winning the World Series the day after. Thanks to wedding-gift tickets from a friend, we got to sit in the upper deck behind home plate for that game.

Anyhow, 32 years later it was pouring rain on the Autoroute and we stayed in cozy Ibis Budget Motels on the two nights of the drive. On the second morning, the skies had cleared, and we headed for a campground called La Vieille Ferme (The Old Farm) about 10 km down the coast from Nice. French campgrounds are not rustic: automatic sliding glass doors on the lobby of the reception area, baguettes, croissants, and six other choices delivered by order every morning, heated pool, hedges around every site, and immaculate rows of stalls (toilets, sinks, and showers) that shamelessly disobey North Carolina gender-separation law.

Our first day was dedicated to biking to Nice, and we think we found the hotel we stayed at, or maybe it was the hotel that John and his sister had stayed at a few years before. It was pretty snazzy.

We went back to the Orthodox Cathedral again. There are no pews or chairs, and the walls are covered with art—mostly icons of saints, but also memorials and biblical scenes. Lots of gold and brass and burnished wood. The icon screen is massive, and the inside of the dome far above is full of golden stars.

In a park near the scene of the Bastille Day Truck Attack of this past summer, we looked quietly at the mounds of stuffed animals sent to Nice from all over the world. There were also French flags with messages of hope and defiance. There were lots of poems by students about how French people—make that normal people—love their families, and art, and dancing, and travel, and eating food from many countries. They ridiculed the extremists as cowards, nihilists, fearful, obsessed with sex, and dedicated to patriarchy. At some point, the government will have to remove all the candles and streamers, and box up the stuffed unicorns, but that time is not yet.

On the second day, we drove to what had been our favorite town on the French Riviera, and maybe it still is. Menton is the least chic of the beach towns, and we are among the least chic of tourists.  We wear the same “comfortable” clothes day after day including flip up clip-on sunglasses (John) or two pairs of glasses on strings (Lynnell). Menton is quiet, and is the only big town in France invaded by the Italian army in World War II, who had to travel maybe five miles to get there. We loved seeing families walking and laughing on the beach, and even in mid-October the people in the ocean did not look as cold as Minneapolitans in Lake Harriet on the Fourth of July.

After a terrific lunch (steak tartare, frites, lasagne, bubble-water), we drove into the mountains, slower and slower as the turns got more severe. Church towers stood out against the clear mountain sky, and every hairpin turn revealed a new view, including the occasional fragrant plume of smoke. They still burn autumn leaves here. 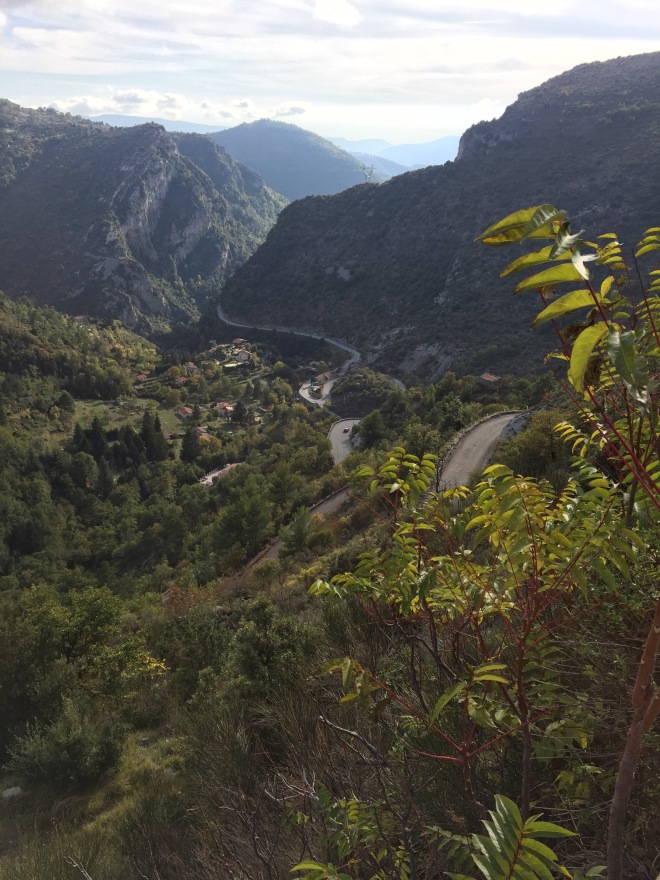 On Day Three, we went to the Fragonard Museum of Perfume in Grasse, which we’d visited on our honeymoon, and enjoyed re-learning about the craft of essential oil-making. It takes tons of rose petals or lavender buds to make even an ounce, and Lynnell googled a bit to find out whether it’s just us, or are a lot of people going unscented nowadays. The answer is yes, but the Fragonards seem unconcerned.  Six scented soaps in pastel colors, anyone? Pressed into the shape of eggs by those nice young men over there and presented in an egg-carton gift box?

Then we returned to our favorite village, St. Paul de Vence, which has become essentially an art gallery. Every house seems to be a place to buy paintings, jewelry, clothing, or ceramics, and though we are not shopping for anything, we loved the combination of rough stone ramparts, tile roofs, and cobblestone streets laid by mosaic artists.

Old guys still play pétanque in the square just outside the walls, and they are not hired to do so by the Chamber of Commerce. This sculpture (below) on the way into the village reminds us of a tall bird coming forward to receive an award. 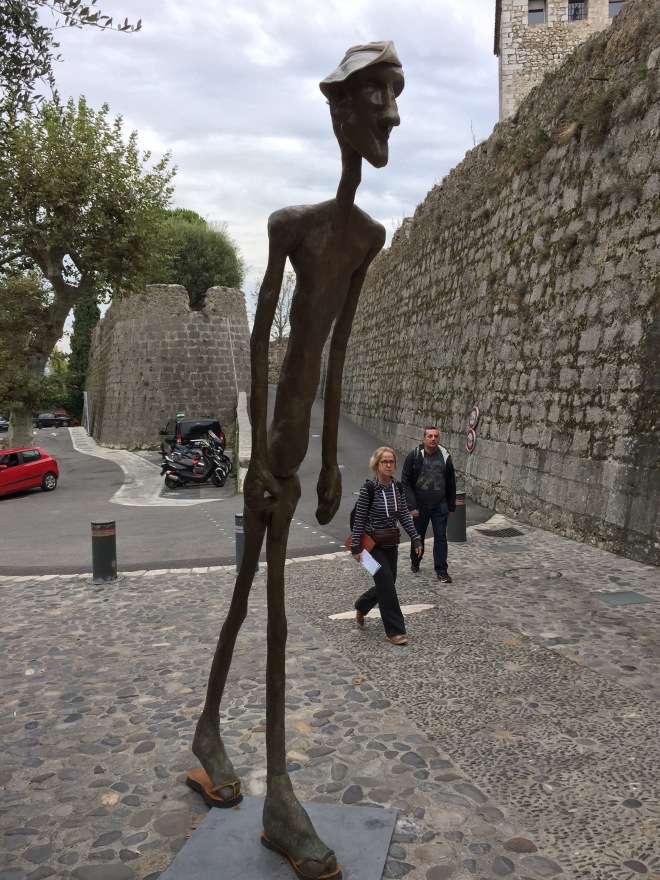 In St. Paul de Vence, we also went to the Maeght Foundation, a wonderful museum and sculpture garden on a hilltop not far from the ancient village. The main exhibition this time was about the artist Christo’s obsession with the idea of building immense pyramids with oil barrels. The symbolism makes you smile: our civilization is built on finding and burning petroleum, and there really ought to be a proper monument for this.

He and his wife Jeanne-Claude have been trying to get sponsors for forty years, including for a pyramid in the desert outside Abu Dhabi that would be bigger than the Egyptian ones. Gallery after gallery featured meticulous drawings and models of pyramids for New York, Berlin, Holland, and other places they visited. The barrels were always orange, yellow, and blue, and the pyramids were always flat-topped, which makes them technically mastabas. To honor their dogged efforts, Maeght curators invited them to build one in their courtyard.

We found the little hotel we had stayed at outside of St. Paul de Vence 32 years ago. Le Hameau is as lovely as ever, set among orange and lemon trees, its white-washed stucco walls and tile roofs looking so sunny and Mediterranean–and its rooms now cost 300 Euros a night.  We told the man at the reception desk that we had stayed here on our honeymoon.

“You should stay with us again!” he said. “Where are you staying now?”

John told him we had a campervan and were staying in a campground near Nice.  He stared at us. “Well, that’s different,” he said in French, but using the classic Minnesota phrase that back homethat connotes disapproval or disbelief.

Yesterday, we drove very slowly along the north rim of the Verdon River Canyon (Les Gorges du Verdon), a place we did not get to 32 years ago. At one point, it is 2500 feet deep, and the river below is a tiny blue trickle.   Next stop: Avignon.

2 thoughts on “Retracing Our Honeymoon Trip”