Apparently “Holy Toledo!” is an accurate description.  Or at least “Religious Toledo!”  As we’ve been learning all over Europe and the British Isles, the workings of church and state are always intermingled, usually leaving God off to one side, shaking Her head in disappointment.

We spent last week in Madrid, mostly walking like zombies through streets filled with wonderful people who were not preoccupied with rearranging all their mental furniture after the election shock of last week.  We didn’t sleep well.  We called home a lot.  We even considered coming home to be with friends, family, and church, like you do when someone dies, and then decided not to.  We will be writing more about the election elsewhere.

For us, Toledo has worked out to be a bicycling city, like Zaragoza and Guernica, rather than a public-transit-and-walking city, like Barcelona and Madrid.  Our campground is just 3 km outside the walls, and our ride takes us across an historic bridge over the Tajo River gorge into the coolest-looking town you’ve ever seen.  The Tajo surrounds Toledo on three sides, making it harder to attack, and it’s only ever been conquered by siege as a result.

Like just about every place we’ve been to, Toledo was Celtic before the Romans captured it.  The Celts, one might recall from earlier posts (Irish Sun Temples)  (Henges and Stones), were the last of the great Iron Age people in Europe, and they were not called Celts for the most part until the 1800’s, when archaeologists began seeing similarities in jewelry, weapons, and stonework over a wide area from Portugal to Ireland to Asia Minor.  Anyway, Roman civilization gradually pushed Celtic culture more and more to the edges of Europe, and they conquered the Toledo area in 193 BC, gave all the local leaders Roman citizenship and tax i.d. numbers, built a circus, a water system, city walls, and baths (thanks to Wikipedia for this background!)

There is almost nothing left from Roman times in Toledo except this stretch of road, just inside the Sun Gate, whose paving stones are giant, smooth, and still in place, about three feet under the street.  Note the modern visitor center on the left, the mosque built in 999, and the three-story houses from the 1800’s (yellow).

After the Romans were pushed aside by the Visigoths, whose name was supposed to be Wesigoths, meaning Good Goths, but a later Roman changed it to Visigoths, which means Western Goths, which they were.  These guys were Arian Christians rather than Nicene Roman Catholics, which meant that their Creed made Christ a creation of God.   The Roman church had asserted in the Nicene Creed (a lot of us recite it on Sundays) that all three “persons” of the Trinity (Father, Son, and Holy Spirit) were eternal, uncreated, and equal.  The Arians saw Jesus Christ as a kind of Vice-President to The Big Guy, and what we now call “Spain” became the Visigothic Kingdom of Hispania from about 400 to 700 CE.

I don’t want to bore you with too much Visigothic history, but here is a five-bullet summary:

In 711, the army of the North African General Tariq ibn Ziyad swept into Spain.  The Visigoth king, Roderic, was betrayed by his own generals, and Tariq was helped by Jews who figured things couldn’t get any worse.  In fact, Muslims in the Middle East and North Africa did have a reputation for pluralism at that time.

Jews (and the Christian majority) under the next few hundred years of Muslim rule were allowed religious freedom and many new opportunities in academia, business, government, and the arts.  It would be called the Golden Age of Toledo.  Jews moved into Spain in large numbers, and the word got out that the Muslim rulers of Toledo were hiring scholars and administrators regardless of religion.  In fact, as the Muslims took over more and more territory, they often put Jews in charge of their newly-conquered cities.

By 838, Jews were so confident of their Spanishness that they began proselytizing to the Conversos. Here’s an unlikely, but true, scenario: a former Christian clergyman who became Jewish debated a Converso Bishop whose Jewish ancestors had turned Christian!

Below is a photo of the inside of a mosque constructed in 999, just as this age was about to get less golden.

The columns were taken from a Visigoth church and recycled for use in the mosque.   I was very surprised to find out that Muslims in Toledo prayed facing south, where the Caliph of Cordoba lived.   Muslim Spain became a rare exception to the rule You Pray Facing Mecca.   In the photo below, you can see the arches layered atop of each other in the central dome. 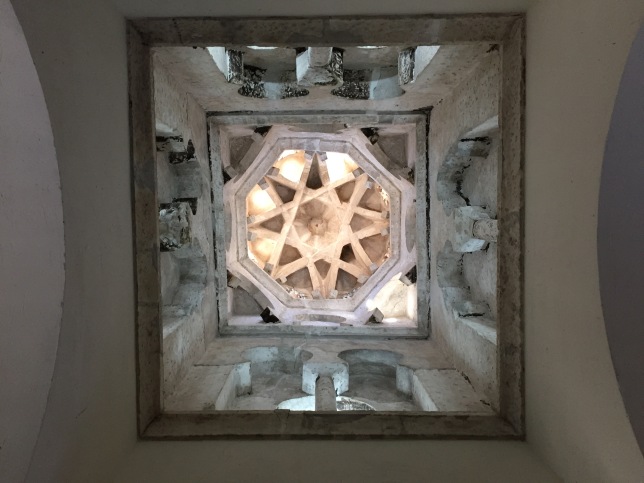 But if you look down a bit, as in this next picture, you see something very surprising: a crucifix. In 1186, the Christians having re-taken Toledo, this mosque was given to a Christian order who doubled its size and turned it into a church very much in the Muslim style.

Just as Jews had helped the Muslims rule over the Christian masses in the wake of the Muslim takeover, during the re-conquest by Christians, Jews were often put in charge of formerly Muslim-dominated towns.  Being translators, administrators, diplomats, and sometimes even soldiers, the Jewish minority was often able to exploit its knowledge of “the other side.”

The photo below is the inside of a synagogue in Toledo from the Golden Age of the Three Faiths (I know: it looks like the mosque!).  It made me think of my friends in Omaha!

This next picture comes from a different and much bigger synagogue in Toledo.  Note the Hebrew letters, which you would expect, and the Arabic script, which is a reminder that many of the Jewish scholars of the Golden Age wrote in Arabic!

Here is the ark for the Torah Scrolls in the same synagogue.

While Christian Europe was mired in the Dark Ages, Cordoba, Toledo, and other Spanish cities were far more cultured and literate than elsewhere on the continent. Because Jews had networks all over Europe, it was their scholars, more than the Arabs, who brought classical Greek ideas to European minds, and helped usher in the Renaissance.

In 1066, however, having been on the wrong side of a war between Muslim kingdoms, there was a terrible anti-Jewish pogrom in Granada. Muslims crucified Jewish General Joseph ibn Naghrela and then killed 4,000 more Jews there.

More intolerant and radical Muslims like the Almoravids had started coming into Spain in the mid-1000’s and the Golden Age began to dim. They were anti-Semitic and anti-Christian.  The Reconquest of Spain by Christians was moving steadily south, and the Almoravids had to go back to Africa to fight in wars there. They were replaced by the much more harsh Almohads in 1172, who gave Spanish Christians and Jews in their shrinking realm three alternatives: convert, die, or leave Morocco and Spain.

It was a foreshadowing of 1492. Jews moved either to Europe or to the Muslim East, but many moved to the Christian part of Spain where they helped the new Christian rulers, much as their ancestors had helped the new Muslim rulers! They were allowed once again to own land, to farm it, and to trade.  For awhile.  There were anti-Jewish riots in Spanish cities in 1392.

The Alhambra Decree in 1492 expelled the Jews.  Scholars say about 200,000 Jews then converted to Christianity to avoid exile, but anywhere between 40,000 and 100,000 Jews were driven out. They weren’t allowed to take any assets with them. Although tradition among the Jews of Toledo held that their ancestors had come to Spain before 70CE, when the Romans sacked the second temple in Jerusalem, and before the crucifixion of Christ, 6,000 Jews in Toledo were nevertheless deported.

We were dismayed to find this nicely-restored text in the Toledo Cathedral, proclaiming that, in 1492, Ferdinand and Isabella cast out all the Jews from their kingdoms of Castile, Aragon, and Sicily.  I assume that the citizens of Toledo of 1992 were not proud of this 500th anniversary, but believed that history required an accurate commemoration.

Meanwhile, back in the Toledo Synagogue, here’s a plaque commemorating Samuel Levi, the patron of the building and finance minister to the king who preferred to die of torture before revealing where his riches were hidden.  His heirs moved elsewhere.

The Jews of Spain were numerous, and after the catastrophe declared by Ferdinand and Isabella spread across Europe and the Middle East.  They were known as Sepharad,  and no country benefited more from their immigration than the Ottoman Empire.  Beginning in 1948, when Muslim countries kicked them out again, Sephardic Jews began migrating in large numbers to Israel.

1492 was bad news for the Jews.  Mostly bad news for Muslims.  But good news for the monarchy.  Columbus brought news of great potential riches from the new world, which he believed was India or China, and soon enough Spain and Portugal were gobbling up territory and bringing home booty from the Americas.

The ridiculously ornate sanctuary below is in the Cathedral of Toledo.  The east wall of the church is covered by wood carvings which are, in turn, covered by gold foil looted from the mines and treasuries of Peru, Central America, and Mexico.  It’s hard to enjoy the beauty when you know how many people died mining, refining, transporting, or defending the gold.

On a lighter note, it made me smile to discover Calle de Toledo de Ohio, a street near the center of Holy Toledo dedicated to friendship with my cousin Doug Davey’s home town.

I close with a tile commemorating Sephardic Spain, a little ceramic logo one finds all over the Jewish Quarter of Toledo and elsewhere in Spain.  Once upon a time there was a thriving Jewish civilization here.  We pray that people of all faiths may find this country, and ours, and others, hospitable in the future.  Surely the echoes of the Golden Age of Three Faiths have not fallen silent forever. 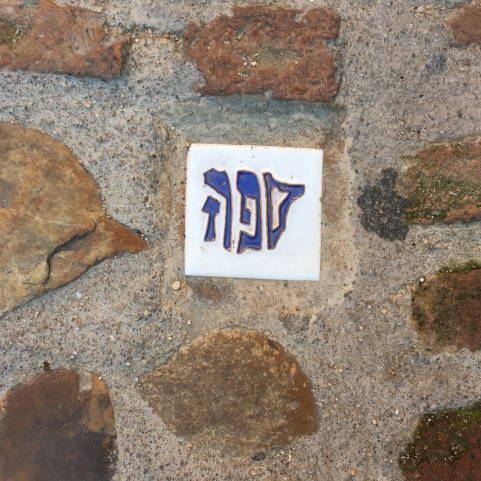 One thought on “Toledo: More Bad Old Days Than Good”